Saint Lucy is the most beloved saint in folk magic and is among the saints closely associated with witchcraft and magick spells.

It's believed that different female spirits operate under her name, such as Lucina, Freya, Juno and Hulda.

She is the patron saint of the blind and people with eye problems. She averts the evil eye; bestows clairvoyance and she's often petitioned for physical healing. In Mexico, they petition St Lucy to protect their home from house fires.

Petition her to help see the way in a certain situation, to see things clearly, to see the truth.

Patron to: the blind and those with eye problems, those born on the 13th of the month, those who don't need eyes to see (clairvoyants)

Symbols: She's often depicted carrying a set of eyes on a plate (or in her palms) with a palm reed in her arms or with a knife in her throat, lamp, sword, palm

Saint Lucy was a beautiful young Sicilian woman who came from a rich Roman family who secretly converted to Christianity when she was a teenager.

After her father died, a pagan man wanted to marry her, but she had already dedicated her life to God, so she refused.
Lucy asked her mother to distribute her dowry to the poor, but her mother refused. Shortly after this, Lucy's mother became very ill with a bleeding illness, so Lucy and her mother went to Saint Agatha's shrine to pray.

Exhausted from being up all night, they both had fallen asleep near Saint Agatha's tomb. When Lucy woke up, she remembered Saint Agatha coming to her in a dream and telling her that her mother had been healed. Lucy's mother was convinced that it was a miracle and allowed the dowry to be distributed among the poor.

Hearing this, the pagan man became furious and denounced her as a Christian. The governor’s guards were sent to get Lucy and take her to a brothel where she was repeatedly tortured, they gouged out her eyes and then stabbed her in the throat causing her death. Her eyes were miraculously restored.

The name Lucy means 'light' so her feast day is celebrated with candles, bonfires and torches. It is said that Saint Lucy wore a crown of candles so she could see while serving the poor Christians who were hiding from persecution in the catacombs in Rome.

Hungarian tradition considers St Lucy's Eve to be among the most effective time for successful divination. Hungarians acknowledge 2 saints named Lucy, one is the official saint, the other is described as a 'strange being'. Hungarian girls and women were forbidden to do any sort of women's work on Lucy's feast day. Instead, the day was spent celebrating Lucy.

External use only. Sold as curio. Results are never guaranteed.  Store away from heat, Keep away from children and pets. Always do a skin patch test. 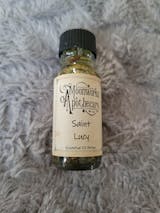